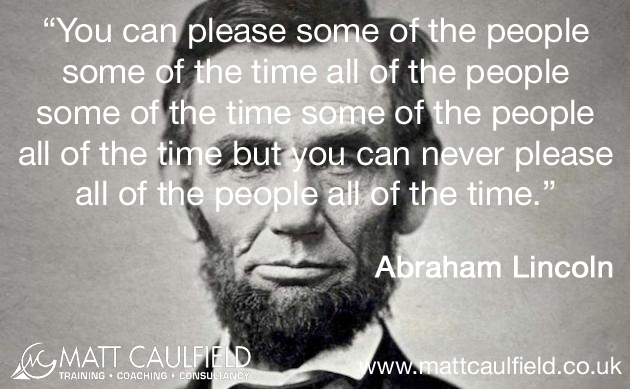 You find me in a bit of a sulk. You see, someone has given my Nested Loops Book a one-star review on Amazon.

If you put yourself out there, eventually you are going to come across someone who doesn’t like what you are doing and will say so. Sometimes very vocally (and sometimes very rudely).

However it doesn’t mean I shrug off this criticism easily. Especially when it is on the internet. In black and white. There for everyone to see. Forever.

In fact, I am fairly thin skinned when it comes to criticism. There is many a time, when I have received bad “feedback” (or what I perceive as bad feedback), that I have resolved to pack it all in and go off and get a proper job.

I know there are some people that get in to the self-help field for self-aggrandising reasons or because they think they can make a quick buck. But I am here because I genuinely want to help and think I have something useful to offer. If I didn’t I wouldn’t be doing this, I would go and do something else instead. So it does hurt when I get some criticism. Don’t like me personally, that’s fine; with the best will (and all the NLP skills) in the world can’t make you get on with everyone, but if you question my professionalism, that’s when it gets to me.

I take what I do very seriously, I want to offer the best possible service that I can; I research everything I can to make sure that I am as correct as I can be; I plan in meticulous detail what I am going to say and how I am going to say. So to have that called into question is always upsetting.

This, of course, does not mean that I am perfect, I have made my fair share of mistakes and this means that some criticism is valid. But when the criticism doesn’t seem just or valid, I find it easy to get very self critical and descend into a spiral of doubt and despair, second guessing myself and wondering if the critic is right and I really am rubbish.

To defend against that harmful thought process I try and follow the below principles:

I take what I do very seriously and as part of that I need to be self aware enough to accept criticism and adjust accordingly. I use the criticism as a learning experience. I have learned more from a bad training or client experience than I have from 100’s of really good ones.

It is also important to attempt to rectify a genuine mistake. If the persons criticism is valid, you HAVE done something wrong, don’t hide away or ignore it, deal with it. Correct it and, if appropriate, do your best to appease the person who has been effected.

There is, in this case, a balance to be found. I have tended, in the past, to instantly assume the person making the criticism is right and it is my fault and I jump into “apology mode”, grovelling and snivelling and promising to put right whatever it was they found to be wrong (whether they are correct or not). I have done that too many times to count and it has mostly been counter productive. Nowadays I am more careful. If someone happens to question the validity of what I have done, I don’t respond immediately, I take the time to consider their view, asking for more clarity if needed. Only if I think they have a valid point do I attempt to rectify it. If I don’t agree, I polity, but firmly lay out my reasons for disagreeing and leave it at that.

2. Some People Just Won’t Get It

There is a saying in NLP that we hold as useful to consider to be true, “the meaning of the communication is the response that you get”. What this means is you may think you are clearly expressing what you want to say, but someone else may interpret what you are saying in a totally different way to what you expect or meant.

You can write or communicate as clearly and precisely as you can and you will still get someone who doesn’t get what you are doing or misinterpret it. That is just a fact of any communication that you have to live with.

3. Some People Will Always Hate You

Especially on the internet. The perceived anonymity of the internet means people don’t have any accountability for their actions, with no accountably they really don’t have any authority at all (it is important to remember that counts for positive reviews too). Also, the internet makes it easy to post anything, good or bad, which means that you are more likely to get criticism (as well as positive reviews). And I do think, sometimes with the distancing effect of the internet people forget they are actually talking about or to a real person, I very much doubt that these people would be as rude and aggressive if you saw them face to face (or at least I hope they wouldn’t!).

I have been known to respond to criticism made online, and have been tempted more times than I actually have. I have lain awake at night thinking of responses, even going as far as writing a defence, before deleting it! On the times I have responded, it has never been helpful and just tended to fan the flames rather than put the fire out.

I came across the United States Air Force Web Posting Response (click on the image for a larger version) and find that really useful as a guide to what to do in those situations, but mostly I just ignore them. 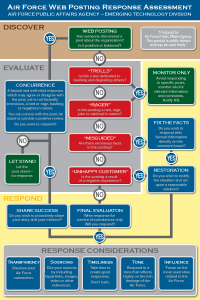 3. There Is No Such Thing As A Bad Review

A bad review means you being noticed, someone has taken the time to write something about you. That means you are heading in the right direction.

I even know some people (I won’t mention their names) who are deliberately controversial and court bad reviews as it gives them exposure. Personally I am too thin skinned to be able to do that strategy, but it is one that seems to work!

If you have three reviews, one is five-star review, one is four-star review and one is one-star review. It is the first two reviews that count. They have “got it”, they have found what you have done useful and helpful. This means you have succeeded in what you are attempting to do. Focus on that, not on the one-star review.

People not “getting you” will always happen the minute you try and do anything (see point one). I have seen people who are much more erudite, intelligent and eloquent than I get really, really bad reviews that I genuinely don’t understand.

If you try to please everyone, you end up not pleasing anyone, or (most importantly) pleasing the people you want or need to. If you are just trying to be a people pleaser you will end up being so wishy washy and bland as to be essentially meaningless. You have to make a stand and you have to accept that that comes with a price. The price that some people won’t agree and of those people some wont agree loudly.

6. Trust In Yourself And Learn to Let Go

If you genuinely think you are doing your best, doing the job you want and achieving the results you are after, then you just have to  keep calm and carry on. Take a deep breath, push the criticism away, shrink it down and make it black and white. Do whatever you need to do to get the criticism out of your head. Trust me, I am speaking from experience, in a few days it won’t seem so bad.

Followon TwitterSubscribeto RSS Feed
Chaining States, Stacking Realities and Nested Loops – What’s the D... Our Perception Of Reality Is Based On A (Best) Guess
Scroll to top