Those of you that read this journal regularly will know that I am in the process of moving to South Wales. In fact, it seems to have been going on for ages.

Well the spanner in the works this week was when I got a call from the Mortgage people informing me that, because there had been several delays with the building of our new house, our mortgage offer had expired.

So, given the current state of the mortgage market and all the negative press, I did what any sensible person would do:

Then I calmed down and set about sorting out a new mortgage.

Which was easier and much less painful than I expected and actually ended up getting a better deal than the previous one!

Reminds me of a story of an old farmer:

“There was an old farmer who had worked his crops for many years. One day his horse ran away. Upon hearing the news, his neighbours came to visit. “Such bad luck,” they said sympathetically. “May be,” the farmer replied. The next morning the horse returned, bringing with it three other wild horses. “How wonderful,” the neighbours exclaimed. “May be,” replied the old man. The following day, his son tried to ride one of the untamed horses, was thrown, and broke his leg. The neighbours again came to offer their sympathy on his misfortune. “May be,” answered the farmer. The day after, military officials came to the village to draft young men into the army. Seeing that the son’s leg was broken, they passed him by. The neighbours congratulated the farmer on how well things had turned out. “May be,” said the farmer.”

You never can really tell whether an event in you life is really a negative or a positive one, the perspective will constantly change.

But we can take this a step further, as Richard Bandler continually says; NLP is about freedom, about creativity, about more choice. Yet often we create beliefs about ourselves or the world around us that limits our freedom of choice 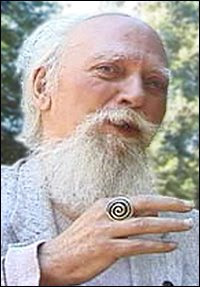 Robert Anton Wilson (a big influence on NLP) developed, in his later years, something called “Maybe Logic”, which isn’t “It maybe logic…” but the logic of “Maybe”, or offering counter examples, ideas, suggestions, theories, etc to challenge your cherished beliefs (and test their validity).

Wilson described his writing as an “attempt to break down conditioned associations—to look at the world in a new way, with many models recognized as models or maps and no one model elevated to the Truth.”…”My goal is to try to get people into a state of generalized agnosticism, not agnosticism about God alone, but agnosticism about everything.”

I am becoming more and more a Militant Agnostic and think the world would be a better place if we just admitted that we “…just don’t know” sometimes!

(Obviously it is context related! I don’t think it is too useful if shops started putting their opening times as “maybe today”, or if you arrange a business meeting and they said they will “maybe turn” for example!)

So, next time you hear a “fact” quickly think of three counter theories about how it could work (it doesn’t matter if they seem silly, it is getting into the habit of challenging your habitual thinking!)

(You may already be reading this on facebook, as this journal is duplicated there but if not…)

Matt Caulfield Training and Consultancy has set up a business page on Facebook. To join and get access to events, journal entries, exclusive photos and discussion boards please click here (you will need a facebook account, but that is free and take 5 minutes to set up).

I look forward to seeing you on there!